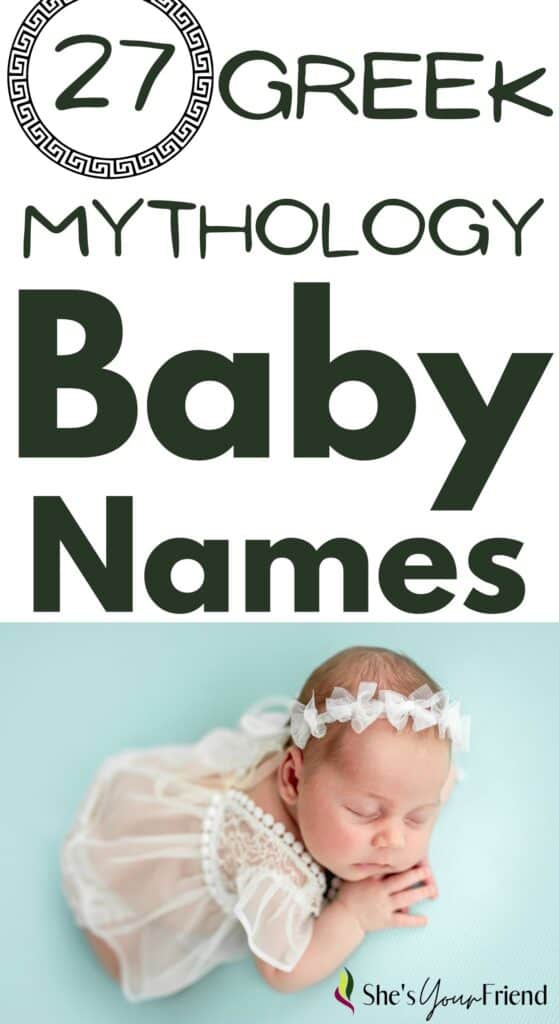 Looking for a baby name inspired by greek mythology? Here's some ideas for baby girls and baby boys.

Whether it's a first name or middle name you are needing, these are some great choices!

Penelope was the Queen of Ithaca, and faithful wife of Odysseus. A fun nickname idea for her could be Pen.

Aphrodite was the Goddess of love and beauty.

This would be a bold first or middle name for your daughter!

In Greek mythology, Athena was the Goddess of wisdom and war.

A nickname idea for her could be Thena.

Calypso was a beautiful nymph and Goddess of the seas.

In more modern times, there was a character named Calypso in the Pirates of the Carribean.

Venus was the Roman version of Aphrodite.

A nickname possibility could be Ve.

Phoebe was the Greek goddess of prophecy and intelligence.

This is another baby girl name that has continued on over the centuries.

Andromeda was a princess known for her beauty.

The name means ruler of men in Greek.

Calliope was the goddess of music, dance, and poetry.

A nickname idea for her could be Calli.

Leda was queen of Sparta, and mother to Helen of Troy.

This is a fun 4 letter baby girl name that is not overly used.

Hera was the goddess of women, marriage, and family. She was known to be a protectress, and Queen of heaven in Greek mythology.

Helen of Troy is known for her beauty and was the major cause of the Trojan war.

The name itself means light or bright in Greek.

Medea was a princess who fell in love with the Greek hero Jason.

There are a couple of different nicknames for her including Dee or Dea.

In Greek mythology, Pandora was the first mortal woman ever created.

The name means all gifts in Greece.

Electra was a princess in Greek mythology, and daughter to king Agamemnon.

Her name means shining or bright and radiant.

Circe was the goddess of magic.

In Greek, this name means bird.

She was a princess in Greek mythology, and helped Theseus through the maze to defeat the minotaur.

A fun nickname idea for her could be Ari or Aria.

Artemis was the goddess of wild animals and hunting.

This would be a great baby name for a boy or a girl!

Apollo was the Greek God of light, art, archery, and poetry. He's known for riding his fiery chariot through the sky.

This would be a handsome baby name for your son.

Hector was a prince of Troy and one of the bravest warriors ever known.

This name means steadfast or to hold.

Hermes was the Greek God of trade, wealth, and luck.

In Greek, this name means messenger of the Gods.

Zeus is God of the sky and thunder. He is also the ruler over all the other gods and goddesses.

This is another powerful and bold name for your son.

Ares is the Greek God of war and courage.

This would be another name that could be used for a baby boy or girl.

Perseus was half-mortal and half-God, who defeated Medusa and rescued Andromeda.

A nickname for him could be Percy.

Prometheus was a Titan of fire who shaped mankind out of clay.

The name means foresight in Greek.

In Greek mythology, Jason was a hero and leader of Argonauts. Probably one of the only names that is still common to this day.

Hercules was the strongest mortal and Greek hero in mythology.

We all probably know Hercules from the Disney movie depicting the story of his life, and all those really catchy songs!

Achilles was a great warrior who was thought to be completely invincible except for an area on his heels.

This would be another unique baby name that is rarely used today!