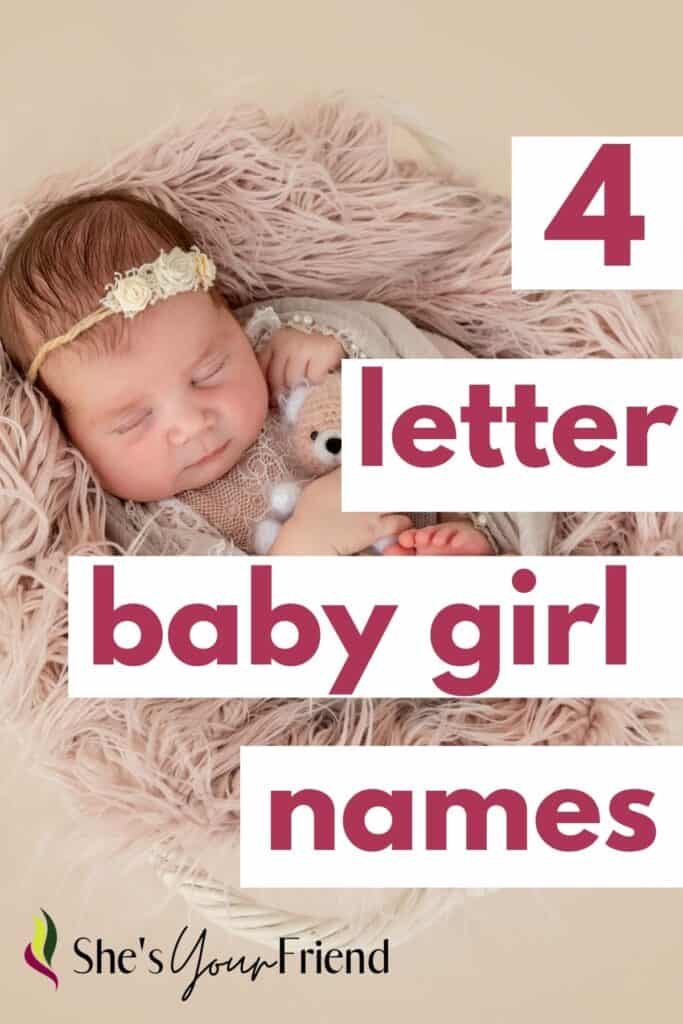 Are you looking for a short 4 letter girl name for your baby? If so, this list has a bunch of beautiful and sweet names that would be perfect for your daughter.

In Hebrew, Aria means lion of God. It also has some Italian and Persian origins too!

Italia for song or melody, and Persian for noble.

English origin, Jane means God is gracious. Jane is a strong name that many successful women have, including Jane Austen, Jane Fonda, and Jane Goodall.

Spanish origin meaning young girl or feminine. Ella is a fun name for your daughter!

In Hebrew, Anna means grace or favor. Made popular again by the Disney movie Frozen, Anna another short and sweet name.

Greek for life. Zoey has a few spelling variations, but this is the most common one.

Greek for guest or stranger. Xena is most notable a warrior princess in Greek mythology.

French for fairy or elf, Faye is a great magical baby name for your daughter!

Arabic for blooming flower. Zara is another unique 4 letter baby name that has such a beautiful meaning.

Thea has a Greek origin meaning Goddess. In Greek mythology, she was the Goddess of light.

Rhea is another greek name means a flowing stream.

Anne has a Hebrew meaning of gracious, merciful or favored by God. A few notably people with this name are Anne Hathaway, Anne Frank, and Anne Boleyn.

Brea has a Gaelic origin meaning noble or exalted.

Latin for deep red gemstone. There are lots of different ways you could spell this, but this four letter variation is the most common.

English origin for glory. Cleo is a shortened form of Cleopatra.

Dora is Greek for gift. In Latin, Dora means gift of God.

Elle has a French origin meaning she. In Hebrew, it means feminine or bright one.

Emma has an old German origin meaning whole or universal.

Joan is another Hebrew name meaning God is gracious.

Erin is Irish for "from the island to the west".

Tess is a short form of Theresa which in old English means harvester.

Jean is french for God is gracious. It is also the English and Scottish version of Jane.

Skye comes from an old Norse world meaning cloud. There are a couple of different variations for this name, with the e and without.

Gwen is Welsh for fair, white, blessed or holy. Shortened version of Gwenivere or Gwendolyn.

Jill is English for child of the Gods or youthful.

Kris is English for follower of Christ.

Rory is Irish for red king. Most of us know Rory from the Gilmore girls, which is Lorelei's daughter.

Iris is Greek for rainbow. It's also a beautiful flower name too!

Kara is Italian for beloved. In Gaelic, the spelling variation Cara, means friend.

Lana has multiple origins including a Gaelic word for child. It's a shortened form of the name Svetlana which means light.

Cora is Greek for maiden. It also comes from a Latin word meaning daughter.

Rose is Latin for flower.

Lisa is English and Hebrew for God is my oath.

Emmy is French for hard working.

Juno is Latin for queen of heaven.

Kira has quite a few different origins and meanings. In Japanese, it means glitter. In Persian, it means sun, and in Irish it means black.

Leah comes from a Hebrew word for delicate.

Hope has an English origin and means to cherish a desire.

Isla is Scottish for island. This would be a great unique baby name that not many people have!

Lena is Persian for ray of light. There are a couple of different spelling variations, but any of them would be perfect for your daughter.

Anya is Hebrew for resurrection.

Lara is Latin for protection.

Milk comes from the Spanish word for miracles.

Evie is Hebrew for life. This is another old-fashioned name that hasn't been used in awhile.

Lyla is Arabic for night. It also has a couple of different spellings.

Maya comes from the Greek word for water. In Latin, it means great.

Mary is Latin for star of the sea. This name has been used throughout time, and still has a lot of prominence to this day.

Nala in Swahili means lioness, queen or successful. Definitely a strong name for your baby girl.

Raya in Hebrew means friend. In Bulgarian, it means heaven.

Rain means abundant blessings from above.

Sara is German for princess, queen or pure.

Lucy is Latin for light. It's another old fashioned name that is still fun today!

Vera means faith. There are a couple of different spelling variations, but this one is used most.

Ruth in Hebrew means friend. This would make a great first or middle name!

Jade is a type of beautiful green gemstone. This elegant name is great for a baby girl!

Mira comes from the Latin word meaning admirable. In Spanish, it means look.

Nina in Spanish means little girl. She was an Incan goddess of fire.

Nora is Arabic for light. In Latin, it means light.

Luna is Latin for moon. In Roman mythology, she was a goddess of the moon.

Lily is Latin for flower, pure, and beauty. There are a couple of different ways you can spell this, but this one is the most used.