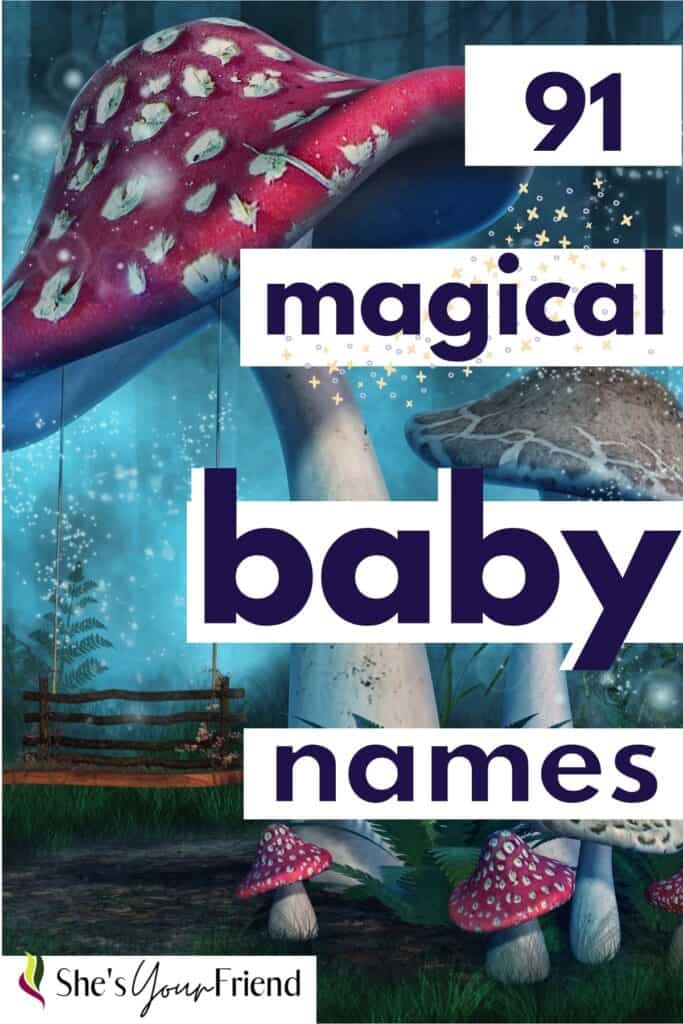 Are you expecting soon, and looking for a mystical name for your baby boy or girl? If so, we have a great list of name ideas inspired by some great fantastical shows, books, and movies.

1. Calypso- Greek for she who hides. In Greek Mythology, Calypso was a goddess of power and beauty.

2.Gael- Celtic for healer or little and lovely.

3.Tilda- Germanic for powerful and mighty in battle. This is a shortened form of Matilda.

4.Geillis-Irish for shining or bright.

5.Imogen-Gaelic for maiden and Latin for innocent.

7.Tourmaline-Tourmaline is a type of gemstone that would make a great name for a baby girl. Her nickname could be Tori.

13.Triss- Latin for happy or blessed.

15.Moirane- means earth and stones carried by a glacier.

16.Egwene-a slight variation of the name Gwen which is Welsh for fair, holy, or blessed.

17.Nynaeve- from the Arthurian legend, Nyneve was the lady of the lake.

18.Liandrin-Lian is Latin for lotus.

21.Lyra-Greek for small harp and Nordic for brave.

22.Serafina-Hebrew for fiery or burning. A possible nickname could be Sara.

23.Xaphania-A different spelling of Zaphaniah who was a Hebrew prophet in the 7th Century.

24.Stelmaria-Latin for star of the sea.

25.Arwen-means noble maiden from the elven language of Lord of the Rings trilogy.

26.Galandriel-means maiden crowned with garland from the elven language of Lord of the Rings trilogy.

27.Eowyn-Old English for horse of joy or horse lover. This is another name that was created for the LOTR books.

30.Resa-Greek for hunter or harvester.

31.Elinor-Hebrew for God is my light.

32.Tayla-means gift of God. A nickname for her could be Tay.

33.Beatrix-Latin for voyager or traveller. A nickname could be Bea or Trix.

36.Tien-Vietnamese for fairy. A nickname could be Ti for short.

37.Lorena-Latin for "laurel" which is a symbol of a victory.

38.Guinevere-Welsh for white ghost or phantom. A nickname for her could be Gwen.

39.Freya-Norse for a noble woman. Her nickname could be Frey.

40.Isolde-Welsh for beautiful lady. A nickname idea for her could be Izzy.

41.Winry-Welsh for blessed. Your daughter's nickname could be Winnie.

42.Nimueh-Greek for memory. Nim would be a beautiful nickname for her!

43.Vanya- Slavic for God is gracious.

47.Rycroft-British for rye field. His nickname could be Ry.

48.Absalom-Hebrew for father is peace.

49.Darius-Persian for wealth, rich, or kingly.

50.Fergus-Scottish for man of force.

51.Geralt-means ruler with a spear. Most notably Geralt of Rivia in the tv show The Witcher.

52.Vasemir-Polish for he who cherishes peace.

54.Artorius-Roman for noble or courageous.

58.Aram-Persian for child of the sun.

59.Bran-Welsh for raven or crow.

64.Merlin-Welsh for Hawk. Merlin is probably the first name you think of when you hear a magical boy name.

65.Aragorn- A great Lord of the Rings name that means "noble valor".

66.Legolas- Elven for green leaves, this is another name that was created by JR Tolkien for the Lord of the Rings.

67.Elrond-elven for star dome, this too is a name from LOTR.

68.Theoden-English for leader of the people. A nickname idea is Theo.

71.Percy-French for pierce the valley.

72.Arthur-Welsh for bear. Arthur holds a magical effect from the story of King Arthur and excalibur.

73.Klaus-German for victory of the people.

74.Luther-English for army of the people.

76.Garrett-English for rules by the spear.

78.Mortimer-old french origin meaning dead sea. A nickname for him could be Morty.

80.Ander-Scandinavian for lion man. This strong magical name would be really cool for your son.

81.Rendell-Old germanic form on Randall which means wolf shield. Ren could be his nickname.

82.Laertes-In greek mythology, Laertes was the father of Odysseus.

83.Claudius-Latin for fair or just.

85.Odin-Old Norse for raging or frenzy. The vikings though he ruled over Valhalla.

89.Dara-Hebrew for pearl of wisdom

90.Perrin-English for rock. A nickname could be Perri or Rin.

91.Riven- English for tear something to pieces. Riv could be a nickname.

What are magical girl names?

Some of the best magical girl names come from fairy tales, mythology, novels and pop culture like Calypso, Moira, or Guinevere.

There are lots of places like literature, mythology, or even your favorite movie! You can find inspiration anywhere, it's just a matter of being creative and finding the perfect name for your sweet baby.