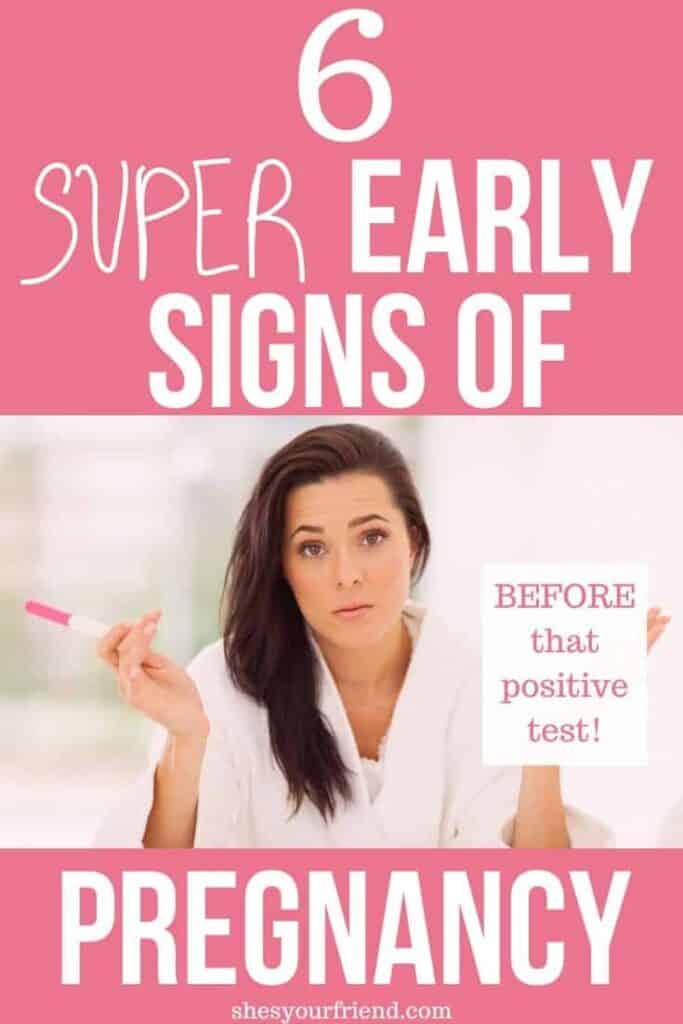 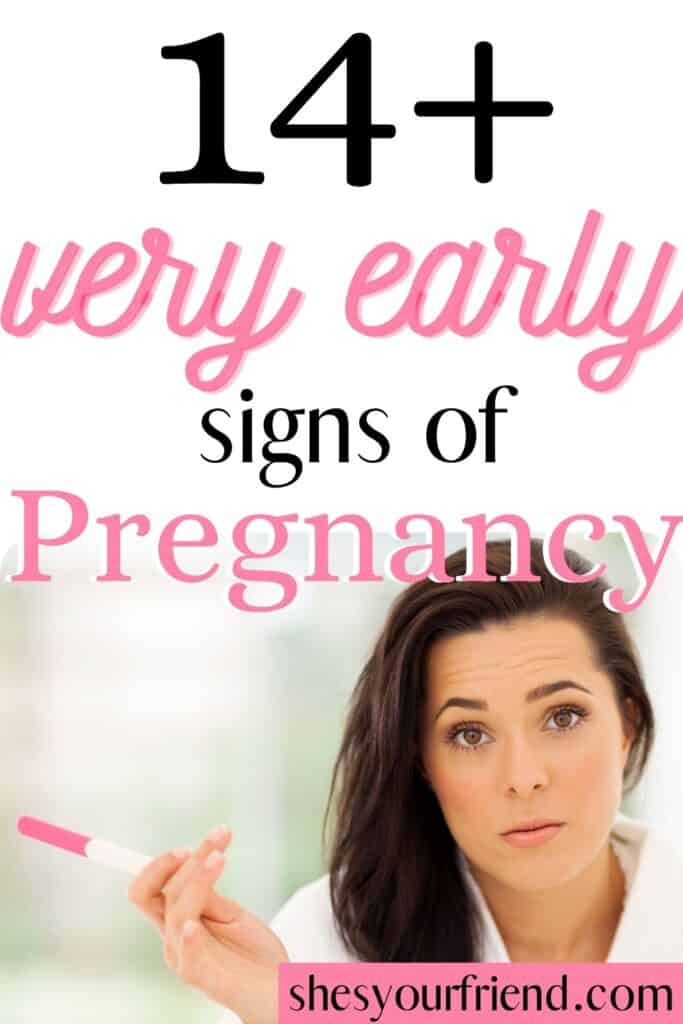 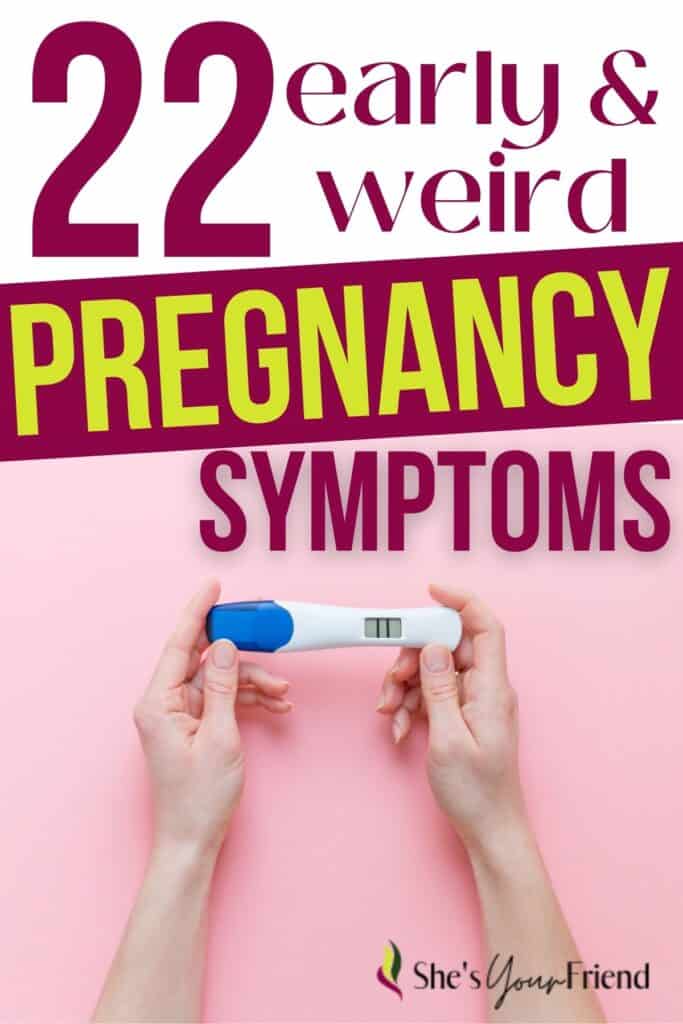 Learn all about the early pregnancy signs before your missed period, as well as some strange symptoms you might experience later on.

Here are the early signs and symptoms of pregnancy:

One of the first signs of pregnancy would be nausea.

It might start off as rather small and as you get further along it will increase quite a bit.

This is due to the increase in pregnancy hormones as your baby grows inside of you.

Nausea will also most likely turn into vomiting (I won't call it morning sickness because it can happen all day long).

Again, you can blame the increased hormones on possible mood swings.

With all of my pregnancies, when I started snapping more at people, it became a red flag that I was pregnant.

This doesn't necessarily mean it will happen, but if you find yourself losing your cool easier than normal it my be a sign.

Pregnancy symptoms can also affect your sense of smell. Certain smells might make you want to run for the hills or to the nearest toilet!

You might also be surprised at how much more you can smell just in general.

I once worked in a grocery store while pregnant, and that was both a blessing and a curse.

There is also the common saying that pregnant women crave pickles and ice cream, but I can't confirm that.

I hate pickles, and never once craved them!

5. Your bladder starts betraying you

Pregnant women are notorious for using the bathroom all the time, and this starts early on in pregnancy.

This is because of the increased pressure from your growing uterus on your bladder.

Like a lot of these early signs of pregnancy, it will only get worse as you get further along.

This fifth sign of pregnancy is one I experienced a lot with all of my pregnancies.

I would be fine one minute and hot the next.

I'm not quite sure if all pregnant women have experienced it with their pregnancies early on, but I definitely did.

Thanks to all the changing hormone levels, your nipples might start to feel tender and sore.

The last more sure-fire early sign of pregnancy is a missed period.

While missing your period doesn't always indicate pregnancy, it is a big reason why women buy home pregnancy tests.

If you have missed your period or suspect you are pregnant, I really liked these pregnancy tests that you can buy on Amazon.

They seemed to give me an accurate result the fastest, and you didn't have to collect your urine and dip it, you could simply pee on the stick.

Pregnancy tests are not always 100% right, so it's important that you verify with a doctor if you got a positive or you got a negative but still think you are pregnant.

Pregnancy changes your body, in many different ways, and can even cause some strange pregnancy symptoms. Here's a look at some of the things pregnant women go through that you probably didn't know!

It's a real thing...or at least every pregnant lady you talk to will agree. It's not so much as your memory declines, but that your not mentally as sharp as you once were.

I think it's your body preparing for mom brain ;).

Another one of the strange pregnancy symptoms involves your gums. Even if you are an avid teeth cleaner, pregnancy will make those gums bleed!

The bleeding gums is actually caused by the increase in estrogen and progesterone.

So, if you are at your dentist, let them know you are expecting so they lay off the flossing comments.

Strange pregnancy symptoms also include lightning crotch. There's probably a more scientific name, but it feels like a burning stinging feeling down there.

Almost as if lightning struck you.

Although this isn't always the case, pregnancy can also make you have a stuffy nose that just won't go away. It's actually caused by those fluctuating hormones.

Strange pregnancy symptoms can also affect your ligaments. This is caused by your growing baby and can make for some sharp pains in the sides of your abdomen.

Or should I say heartburn from hell! This is caused by a few different things and can be one of the most awful pregnancy symptoms.

According to the Cleveland Clinic, severe heartburn can be caused by your pregnancy hormones relaxing the valve that separates your stomach and your esophagus which allows stomach acid to splash back upwards.

Another possible cause is your growing uterus puts too much pressure on your stomach, which in turn pushes stomach acid upwards.

If it gets really bad, talk to your doctor about what is safe to take during pregnancy.

There is also old wives tales and pregnancy that involve heartburn and the amount of hair your baby will have.

As pregnancy symptoms go, back pain can encompass a lot of different things. It can be caused by your baby kicking you, or even your body getting so sqished up that your back actually gets out of alignment.

Some pregnant women will seek help from a chiropractor or even a physical therapist. If this sounds like something you would be interested in, talk with your doctor for recommendations.

When it comes to pregnancy symptoms, the strangest of them all is the dreams. They were some of the most REAL dreams but also weird.

This is one of those pregnancy symptoms you need to discuss with your doctor ASAP if you experience vision changes like bright flashes and sparks.

The reason why is because it can signal you might have a blood pressure problem or even the beginning of pre-eclampsia.

Pregnancy involves a lot of hormones...hormones that can play a big role on your emotions. You might start experiencing a lot of mood swings including anger and sadness.

I don't know how many times I would be bawling my eyes out during pregnancy while watching a movie or tv show that wasn't even sad.

Pregnancy symptoms can also affect your complexion and can either give you acne or make your skin clear up. Again, you can chalk all this up to your changing hormones.

There's another old wives tales about pregnancy and acne in regards to your baby's gender.

Okay this next symptom isn't exactly strange, but the alternative name for it is. Stretch marks or tiger stripes can also happen during pregnancy as your stomach stretches while your baby is growing.

These next pregnancy symptoms are anxiety and/or depression. This won't happen to every woman, but it does tie back into your fluctuating hormones and also the mood swings you might also have.

Typically, this happens in women who have had a history of anxiety or depression, but not always!

Your sense of taste may also be affected during pregnancy. There is the cliche that pregnant women crave pickles and ice cream, but for you it could be something completely different!

I, for one, NEVER craved pickles (but, that's probably because I have never liked them).

This might not actually be a symptom of pregnancy, but more of an unexpected result of your baby kicking your ribs.

Surprisingly though, your ribs might actually be more susceptible to getting fractures because of excessive coughing.

According to the US National Library of Medicine, this is caused when "the enlarging uterus causes certain opposing muscular forces to act on the ribs, making them more susceptible to fracture after minimal trauma or after repeated stresses such as a chronic cough."

Who would have ever thought there were so many symptoms of pregnancy? Did you experience any of these? Leave a comment below!