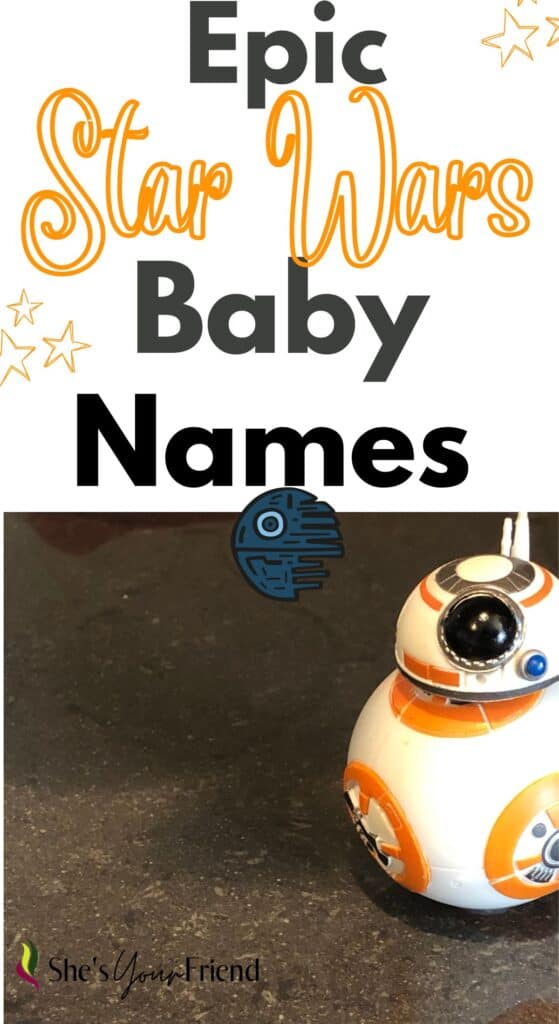 Star Wars is filled with lots of unique names and characters, and a great place to get baby name inspiration.

Princess Leia is probably one of the most well-known female characters in Star Wars.

Padme is persian for "lotus flower".

Padme Amidala was the Queen of Naboo, and mother to Luke and Leia.

Cara is Latin for "friend".

Cara Dune was a character from the Mandalorian, a star wars spinoff.

Omera means "having a positive attitude".

Omera was a villager woman in the Mandalorian who befriended and offered to take Grogu in.

Breha is a spelling variation of Brea and it means "strong or noble".

Beru is Japanese for "bell".

Beru was Luke's Aunt who helped raise him.

Norra is a spelling variation of Nora which is Irish for "light".

Norra Wesley was a rebel pilot who helped to restore the republic.

Amilyn is a combination of two popular girl names (Amy and Lyn). Together, it means beloved lake or waterfall.

Amilyn also known as Vice Admiral Haldo bravely sacrificed herself by ramming a ship at light speed so that everyone else could escape.

Jyn is a spelling variation of Jen and means "God is gracious" in Scottish.

Jyn Erso is a character in Rogue One and fights with the Rebel alliance.

Hera is Greek for "protectress".

Hera Syndulla is a pilot, leader, and part of the Twi'lek tribe.

Rose is Latin for "rose or flower".

Rose Tico is part of the support crew for the resistance and befriends Finn (a storm trooper turned good guy).

Q'ira is a spelling variation of Kira which means "dark-haired".

Q'ira is from the Solo spinoff, and she was a childhood friend of Han Solo.

Ahsoka was a female Jedi who met with baby yoda and learned the child's name was Grogu. She is also apart of the Twi'lek tribe.

Koska is polish for "scythe or sickle".

Koska Reeves was a female Mandalorian from a less strict group who are allowed to remove their helmets.

Xi'an is chinese for "noble or peace".

Xi'an was a Twi'lek female mercenary from the Mandalorian series.

Peli is Latin for "happy".

Peli Motto was a mechanic on the Mandalorian who helped watch Baby Grogu while the mandalorian went on missions. She was witty and kind.

Luke Skywalker is a Jedi, son of Annakin and Padme, and one of the most well known characters from Star Wars.

Anakin means "son of the eagle" in old Germanic language.

Anakin Skywalker is a Jedi who turned to the dark side and became Darth Vader.

Ben is Obi-wan Kenobi's nickname. He is a Jedi who trained Annakin and Luke Skywalker.

Lando Calrissian started as a smuggler and friend to Han Solo who then joined the resistance to fight against the empire.

Kylo Ren is Ben and Leia's son, who changed his name to Kylo after turning to the dark side.

Finn was a storm trooper with the code FN-2187 who abandoned his position to join the resistance.

Owen Skywalker was Luke's uncle who raised him as a baby.

Han Solo was a smuggler who was famous for making the Kessel Run under 12 parsecs. He then joined the resistance while helping Luke and Ben escape Tatooine.

Moff Gideon is a character from the Mandalorian who is a leader in the empire.

Bo means "to live" in Scandinavian.

Bo-Katan is another mandalorian who wants the dark saber.

Cobb Vanth is the sheriff of Free Town who makes an appearance in the Mandalorian and Boba Fett.

Poe Dameron is a commander of the star fighters for the resistance.

Rey is an orphan who's parents left her on Jakku, and is trained by Luke Skywalker in the ways of the Jedi. She is also somehow tied to Ben (Kylo Ren) Solo.

Zorii Bliss is the leader of the spice runners during the war between the first order and the resistance.

Maz Kanata is a pirate underground queen who gives Rey a lightsaber and is considered a neutral character until war breaks out in her land.

Fennec Shand is a bounty hunter in the spinoff series Boba Fett. She helps him take over Jabba the Hut's old stomping grounds.

Kuiil is a spelling variation of Quill which means "feather" in English.

Kuiil helped the mandalorian find the child in the beginning of the Mandalorian series.

There's lots of names to choose from but some of the most commonly used are Luke, Ben, Owen, Gideon, Cara, Rose, Leia, Norra, and Rey.

Can I name my kid Ahsoka?

Absolutely, the name means pure or light. This could work for a first or middle name!

What is a good genderless name?