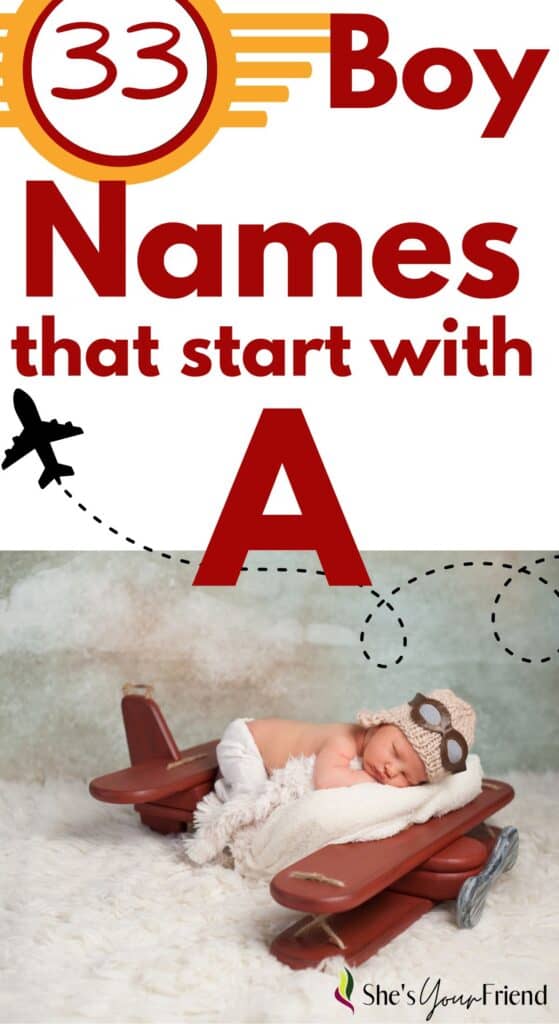 Here's some handsome and adorable baby boy names that start with the letter A.

Popular guy names starting with A

Aaron is Hebrew for mountain of strength.

This popular name has a few different spelling variations, but this one is the most common.

This name has been popular for many years, is easy to spell, and would be a great first or middle name.

A nickname for him could be Andy or Drew.

Alex is the short form of Alexander meaning protector of men.

This four letter baby name is handsome, and could be great as a first or middle name.

Arthur is Celtic for bear.

This name is more old-fashioned, but legendary nonetheless.

Abe is the short form of Abraham, and means father of many.

This three letter baby name could be the perfect first or middle name you are looking for.

This name has gained popularity, but it's origin dates back to the Vikings.

A nickname for him could be Al or Bert.

A nickname for your son could be Alex or this could be a very strong middle name.

Andy is the short form of Andrew which means strong or manly.

A new trend for baby names is naming your child the short form of some more well-known names.

There are a couple of different meanings for Alan including little rock, handsome, or precious.

A nickname for your son could be Al, or use it as a middle name.

This is another old-fashioned name that not many have.

This is a more modern baby name that is very handsome.

This boy name is another great first or middle name.

This name would be a very cool choice for your little one.

A nickname for him could be Al, or use it as a middle name.

This name is another lesser-used option, but very handsome!

It has a couple of different origins including Greek, French, and Portuguese.

A nickname for your son could be Tony, or pick this for a middle name.

A nickname for him could be Auggie or Gus.

Antoine is the French version of Anthony, which means priceless or worthy.

While this is popular in France, it would be a more unique name in other areas of the world.

Alberto is the Spanish version of Albert, meaning noble or bright.

A nickname for him could be Al or Berto.

August is the short form of Augustus which means majestic.

It's another rare name, but still used scarcely.

Alejandro is the Spanish version of Alexander which means protector of men.

Antonio means priceless, and has a few origins including Latin and Greece.

Unique male names that start with A

Azriel means God is my help.

This is a rare A name for your son that would perfect as a first or middle name.

This unique name is definitely not over used.

Aragon is inspired by the kingdom of Aragon in Spain.

This bold name would be quite the statement for your son.

This is a strong name for your little one.

This name is another more rare choice.

A nickname for him could be Ric.

Inspired by the popular book "To kill a Mockingbird".

While this name is almost non-existent, you can find it in the popular Harry Potter books.