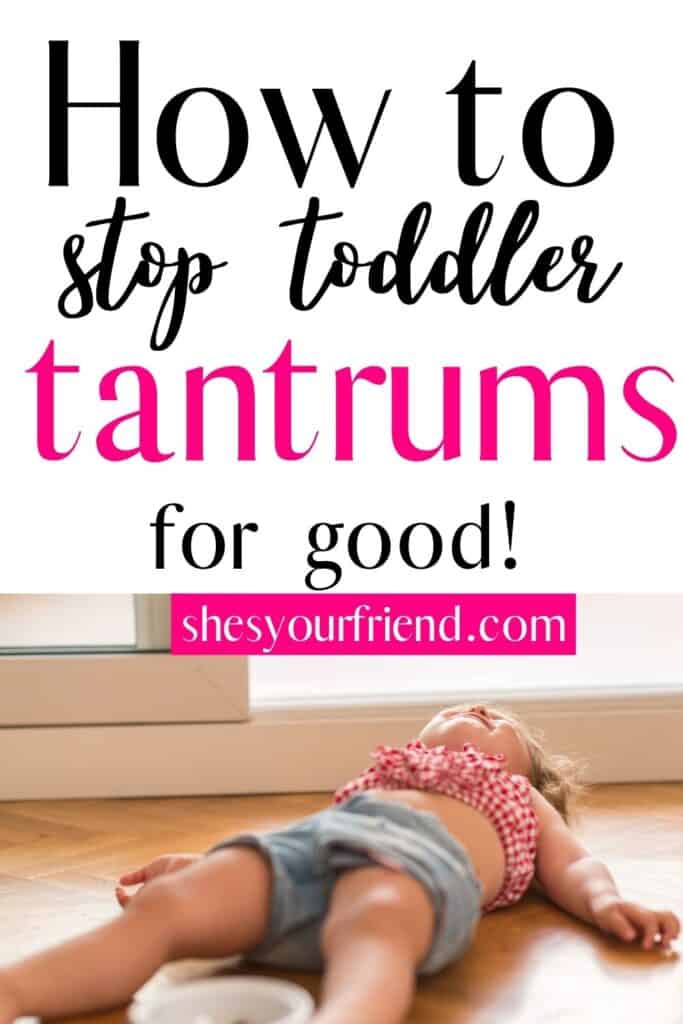 We've all been there. Our sweet angel turns into a temper tantrum-throwing monster. We then remember how we swore up and down OUR kids would NEVER have temper tantrums. Hah!

So...what is the best thing to do when your toddler throws temper tantrums? Well, there are a few things you can do.

How do you diffuse a toddler temper tantrum?

Here is a quick summary of how to diffuse your toddler's temper tantrum:

1. Talk to them on their level

Bend, or kneel down so that both of you are at eye level. Getting on their level will help them calm down and know you are listening fully.

Then, as calmly as you can, ask them what is wrong.

What ever is causing the temper tantrum, explain CALMLY to your toddler a solution.

If it's a toy they CANNOT live with out, let them know that you understand they would like it. Then attempt to explain that they have toys at home.

The final thing to help stop the temper tantrum is to avert their attention. If they are throwing a fit at the grocery store, ask them to help you pick out the rest of the things on the list.

A lot of temper tantrums happen because toddlers aren't getting the attention they are seeking.

Start by offering a hug to your little one. Then, calmy ask them what's wrong.

You can then provide a solution that is within reason, and hopefully stop the tantrum from escalating.

You will hear many people tell you to just ignore a temper tantrum, but I think it's much better to acknowledge what your child's problem is first.

Then, if they won't calm down after you have explained to them about it, ignore the fit they continue to throw.

This works a lot better because your child will still feel like you are listening to them. If you think about it, what's more infuriating then someone who won't listen to you when you have a problem?

This third approach to toddler temper tantrums is better when you are at home and not in a public area, as you might attract some unwanted glares from others.

What happens when a temper tantrum escalates?

Sometimes, children will also have temper tantrums that escalate into hitting. If this happens, you need to quickly, and firmly explain to them that it's not okay to hit.

I have a few more tips on how to handle and stop a toddler hitting here.

How do you prevent temper tantrums?

1.Little eyes are watching you

Children are extremely perceptive, and they learn from what they see.

If you or someone around them have a tendency to get overly angry at little situations, they may have been copying this behavior.

The best thing you can do is help your child mirror good behavior, and be a good example for them.

If your toddler has temper tantrums at the store while walking past the toy aisle, try to avoid walking anywhere near there! This has worked wonders for my daughter as now she doesn't throw any fits.

After all, out of sight, out of mind.

If you can isolate when and where your child seems to have meltdowns, use that to your advantage. Steer clear of places/aisles/stores that seem to trigger tantrums.

Why exactly do toddlers have temper tantrums?

This might be another question you have when it comes to your toddler. A lot of time tantrums happen when your toddler needs/wants something.

Sometimes, toddlers will throw temper tantrums for the most unexpected reasons. Just smile to yourself and know that it will get better.

Just remember the next time your toddler throws a temper tantrum, get down on their level and talk calmly to them. Offer them a hug, and try to explain to them a solution.

Also, averting their attention to something else is the best way to end a tantrum, but sometimes you just have to ignore the loud, sqwaking toddler and find your inner peace.

Thanks for stopping by! If you enjoyed reading this, please remember to share it. Thanks!!