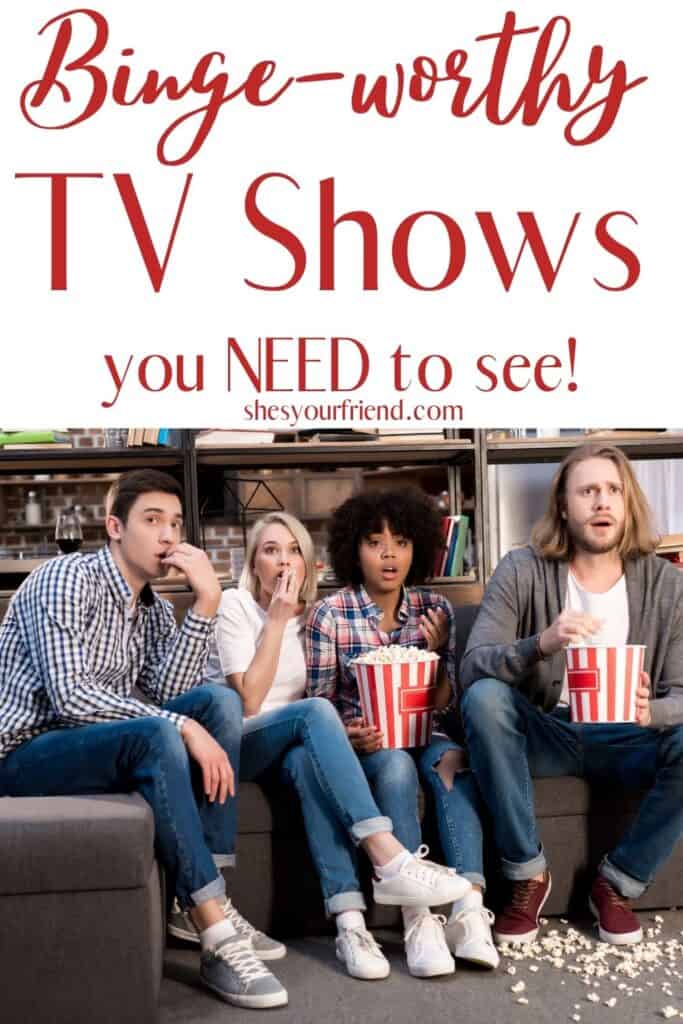 There are 2 types of people. Those that watch tv shows a few episodes every so often, an then their are those who will binge watch an entire season in a weekend. I'm the latter, give me a romantic tv show, and I will have it watched in no time!

Whether you are looking for your next addiction or a new show to watch here and there, these NEED to be on your watch list.

In an effort to fully disclose, this article contains affiliate links. If you purchase something, we would receive a commission. For more information, see our disclosure page.

1. Outlander (on Netflix, Prime, and Starz)

If you like a man with an accent, this love story that takes place in Scotland is amazing. The story of Jamie and Claire rival that of Romeo and Juliet, in this historical fiction.

There's romance, action, adventure, and yes even a little bit of time travel.

2. The Witcher (on Netflix)

This fantasy action adventure is based off of the book series. There are three separate story lines that come colliding together to unfold this action and suspenseful show.

This show is action packed, with a few sprinkles of romances that might develop in later seasons.

Witches, Merlin, and renaissance with a lot of adventures in between. A young fairy woman with witch powers narrowly escapes as her village is burned up and her people killed.

She searches for help to hide from the Red paladins who want her dead, and is helped by a young Arthur.

I'm not doing this show justice by summarizing it either. There are so many different twists and turns that you will be addicted after the first episode!

This is a fantasy crime show where some fairy creatures start getting murdered and an inspector is called in to help find the culprit.

As he searches for answers, he developed a relationship with a fairy woman, all while hiding a secret past.

This spin-off of Star Wars is epic! Just as much action and adventure as the Star Wars, and a cute baby Yoda.

This historical fiction takes place in the Americas in the 1700s. A big fur trade company is the governing power, and one outlaw named Declan Harp is trying to change that.

This action and adventure story will have you on edge to find out what happens next.

7. The Umbrella Academy (on Netflix)

Sci-fi action adventure just got a whole lot better. This show is about a group of 7 kids who were all raised by their father. 6 of the 7 have super powers.

All had lives of their own, until their father dies. They come back to their childhood home and a lot of history gets stirred up...including a brother whom they thought had died many years back.

A young quadriplegic woman who is almost 18 dies and is taken to a morgue. When a mysterious orange halo is hidden inside her, she is alive again and this time not paralyzed.

After a little bit of fun, she is approached by an order of nuns who guard that very halo she has inside her.

A group of knights go in search of the Holy Grail after their leader is murdered because of it.

Their is a hidden romance, action, and corruption at every turn.

10. The Spanish Princess (on Prime or Starz)

The Princess of Spain is married to the King of England who dies shortly after their marriage. Determined to be queen, she lies about her maidenhood so that she can marry his younger brother who is now king.

This historical fiction has romance, scandals, heart break and everything else!

A big city nurse moves to a small town for a job, but also to escape her sad past. Little does she know this small little town called Virgin River grows on her...especially a bar owner named Jack.

This romantic show is interesting from the different plot twists, surprise exes, and the drama that comes from a small town.

If you have ever seen the movie the Golden Compass, this is the tv show spinoff. Each episode is like a full length movie with amazing storylines and action.

For those of you who wished they would have made a Golden Compass 2, this tv series is for you!!

After returning form the war in America, he finds his beloved engaged to his cousin, his father is dead, and what's left of his inheritance is in shambles.

Losing the love of his life, he puts his mind to work trying to fix up his home, and the mine his father had once run.

You might also enjoy: Movies about Fashion and Shopping